You are here: Home / Giant transformers on the move

Giant transformers on the move

Following a similar successful operation back in 2014 which required the relocation of six giant transformers, a firm of transport experts have once again facilitated the smooth transportation and relocation of nine 185 tonne transformers into our region.

Drax Power Station near Goole has taken delivery of the transformers following the closure of Littlebrook Power Station D in March 2015. The project called upon the expertise of transport specialists Collett to devise a solution for transporting each of the transformers, measuring 5.08m (H) x 3.5m (W) x 6.5m (L), from Dartford to Drax. Faced with the task of moving several abnormal loads originating within the busy capital an intricate transport plan was in order to facilitate the loads.

It was proposed that each of the loads would be moved in three stages. Firstly each transformer would be transported individually from Littlebrook to Thamesport, Isle of Grain where the loads would be consolidated into two RoRo barge shipments delivered directly to the Port of Goole. From here the transformers would be stored at Collett’s Goole Heavy Lift Terminal prior to the final five mile onward transport to Drax Power Station.

This proposal required intricate planning throughout; however the logistics of transporting these heavy cargoes from Littlebrook to Thamesport would provide the biggest challenge.  Collett’s Consulting Division worked tirelessly undertaking route studies, site visits and swept path analysis reports of several roads and surroundings to ensure a safe suitable path for the movements.  Having liaised with local authorities, councils and constabularies an agreed route was firmly in place and in March Collett mobilised their fleet and headed for Littlebrook Power station to begin the first of the transformer moves.

Not a simple task of lifting each transformer and loading to an awaiting trailer, each transformer, due to its position, required complex manoeuvring procedures to allow Collett’s Team to safely position for transport.

Due to the position of the transformers Collett had to utilise their specialist heavy duty Jacking & Skidding system to manoeuvre each of the cargoes.  Space limitations within Littlebrook required each transformer to be skidded 6m, before turning 90 degrees and skidding a further 18m to safely clear the confines of the power station’s industrial surroundings.  Finally, after Jacking & Skidding from their original position, the transformers were turned a further 90 degrees to position for loading.

Utilising Collett’s Girder Bridge for the initial stage of the project the first transformer was loaded to the trailer and at 9pm the convoy began its 24 mile journey.  Travelling with three tractor units, two in push pull formation and one in support, four police escorts and two pilot cars, the convoy left Littlebrook Power Station.  As identified by Collett’s Consulting Team the combination, due to its overall loaded weight of 390Te, 16Te per axle and substantial 71m (L) & 5.13M (W) loaded dimensions, would be unable to use the bridge over the M25 at Littlebrook Interchange, and as a result, a rolling road block had been put into place on both the northbound and southbound carriageways of the M25.  This allowed the entire Girder Bridge to contraflow two roundabouts and utilise the northbound sliproad to gain access to the M25.  Once on the motorway Collett’s Team reversed the entire combination for half a mile across the central reservation and along the southbound carriageway allowing access to Exit 1A and onward transport to Thamesport.

Over the following weeks the remaining transformers left Littlebrook and were safely consolidated at Thamesport and after discharge from the Girder Bridge each transformer was stored on stools and load spreading mats portside.  With the transformers safely stored at the Port, Collett chartered the Terra Marique RoRo barge, featuring a hydraulic roadway and ballast system allowing for the vessel to load on varying quay heights.  With the loads safely secured the barge set sail for Goole, firstly carrying three transformers with a second shipment of six to follow in the coming weeks.

Once the loads arrived safely in Goole, work began to discharge the transformers once again utilising SPMT operations and conventional axles to unload the transformers at the Port.  Each transformer then made the short journey to Collett’s Goole Heavy Lift Facility for storage on stools for ease of re-loading.

As and when required each transformer left the Goole Depot and travelled the short distance to Drax Power Station where the transformers were carefully manoeuvred into position for storage. A mammoth operation and a job well done! 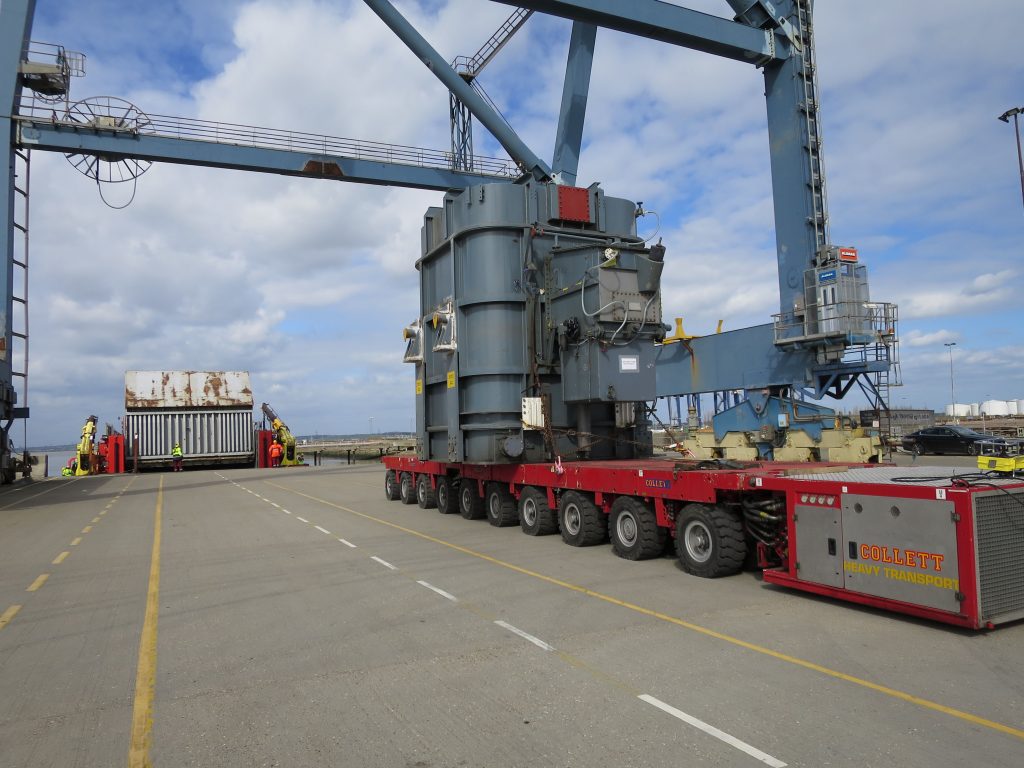 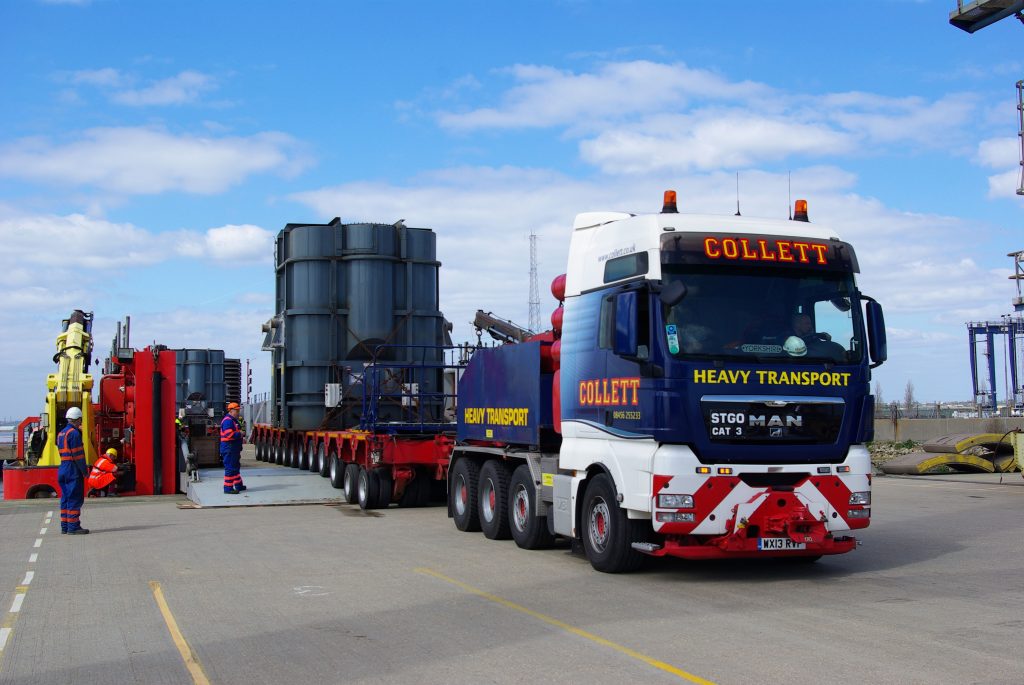 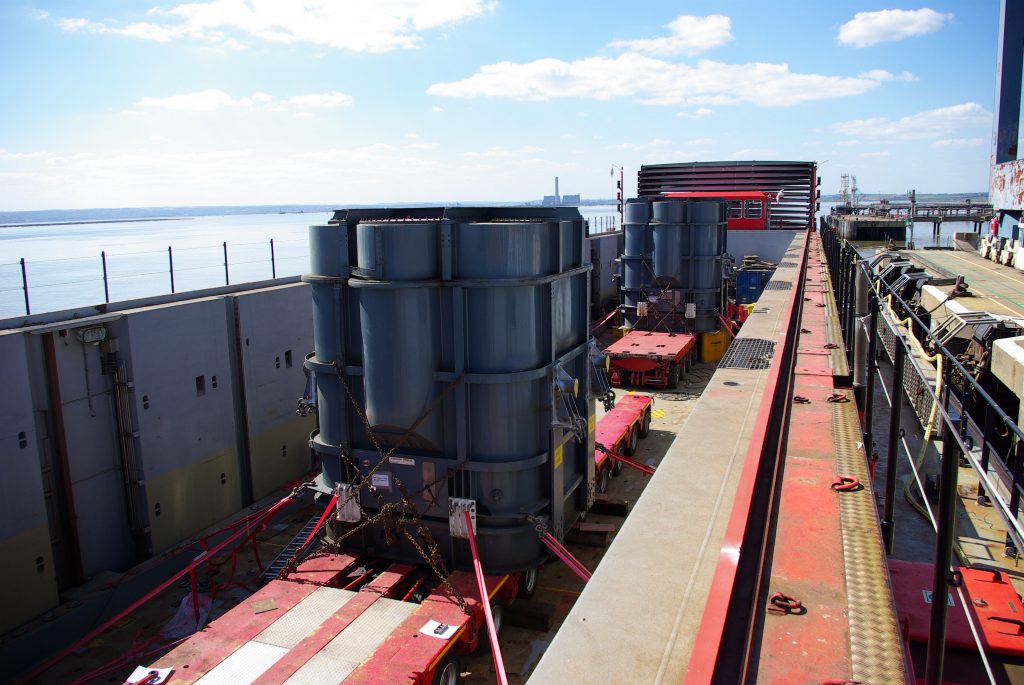