You are here: Home / Goole man fined £300 after being caught on CCTV dumping a mattress

A man from Goole has been fined £300 after he was caught on CCTV dumping a mattress in a town alleyway.

The man is the latest to receive a fixed penalty notice from East Riding of Yorkshire Council following a crackdown on fly-tipping in Goole’s back streets.

A number of mattresses were found abandoned in the alleys behind Weatherill Street and Jackson Street on 8 August this year.

The fly-tipping was investigated by a streetscene enforcement officer from the council, who discovered CCTV footage from a local business showing a man carrying a mattress to the rear of Jackson Street and leaving it there.

A man from Goole was interviewed and he admitted leaving the mattress on the street between Jackson Street and Weatherill Street, but he said he was moving it away from private land, from an alley behind his own home, after it had been dumped there by someone else.

The man was given a £300 fixed penalty for the fly-tipping offence.

East Riding of Yorkshire Council continues to remind residents they are responsible for disposing of their own waste properly and legally – either by using their household bins, taking it to their local household waste recycling site or using the council’s bulky waste service.

Paul Tripp, head of streetscene services at East Riding of Yorkshire Council, said: “To help prevent fly-tipping, residents have a responsibility to make sure they dispose of their waste correctly and legally.”

To prevent themselves becoming the victims of fly-tipping, residents are encouraged to use the council’s SCRAP Code which advises what checks they need to make when hiring someone to take away rubbish to make sure they are genuine.

Residents are urged to follow the council’s SCRAP Code and make the following checks when hiring anyone to take away their rubbish:

(Photos of mattresses dumped in Goole’s back alleys previously. These photos are general photos and do not specifically relate to this case). 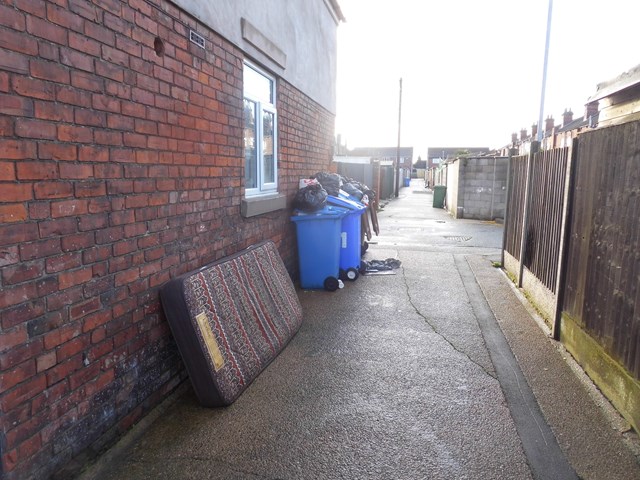