Some new faces will take to the KCOM Stadium on Saturday 22nd September as a handful of lucky junior members will take over some key match day roles as our Junior Takeover returns for the final home fixture of the season!

With roles varying between head coach and pitch announcer, with everything else in between, Hull FC’s clash with Catalans Dragons on Saturday 22nd September (7.45pm kick-off) will be a day that a handful of lucky junior members will remember forever.

Junior supporters interested in applying to be a part of the annual Junior Takeover must be aged between 7 – 16 years old and a 2018 Hull FC member.

To apply for one of the roles in our Junior Takeover, please email membership@hullfc.com with the child’s name, age, the top three jobs they wish to undertake and why they’d fit the bill!

The deadline for all applications is Monday 17th September at 5.00pm and there is expected to be high-demand for the event after last year’s Junior Takeover success during the Family Day clash with Wigan Warriors.

Rob Holt, dad of Emily and Jude Holt, who took part in last year’s Junior Takeover said: “Thank you from all the Holt family for giving Emily and Jude an experience they will never forget. Everybody at Hull FC made us all feel welcome and we feel lucky to have being a part of a special day.”

Hull FC Executive Director James Clark said: “We’re proud to launch our Junior Takeover as we look to reward our junior members and give them an experience they will never forget.”

“We’ve worked hard on our membership programme over the past few years and it has been incredibly pleasing to see junior members rise by 75% since 2014,” he added.

“We are lucky to work in sport and this is a great opportunity to provide some junior members with once in a lifetime opportunities.”

Tickets for the final home fixture of 2018 against Catalans Dragons will go on sale at 9.00am on Friday 24th August. These can be purchased in store from the KCOM Stadium and Savile Street retail stores, over the phone by calling 01482 505 600, and online.

There are a number of exciting roles waiting to be taken by our junior members for the takeover at our meeting with Catalans Dragons. Check out a full list of roles below:

One of the most sought after roles at our Junior Takeover events is that of the head coach, with one lucky junior member getting the opportunity to join Lee Radford on game day. Discuss the game plan with the coaches, practice goal kicking with some of the players and take a seat alongside Lee at the pre-match press conference.

Make yourself heard at our final home game of 2018 and work alongside our pitch announcer Mark Ash, with the successful applicant taking centre stage on the microphone, reading the team news and enjoying an unforgettable pitch side experience.

If you fancy yourself as a social media guru, this is definitely the role for you. Taking over our social media channels, you’ll be able to interact with thousands of Hull FC supporters! Fans will be able to read your match report, which is published on our official website and social media channels! Plus, join the Hull FC Live team in the post-match press conference, as well as the chance to speak to Lee Radford one-on-one and ask some of the questions that you want answered by the head coach.

Get an exclusive tour of the KCOM Stadium before sitting down with Executive Director James Clark to discuss their thoughts on the club and propose changes they’d like to see at the Black & Whites! Before the match, the lucky applicant will lead a board meeting with all Junior Takeover participants, as well as taking to the stage for an interview and meeting the Black & Whites’ main sponsors. Enjoy the game from the front row of the Director’s Box, the best seats in the house.

For those who have a passion for photography, this is the role for you! Capture the moment as the match day experience passes you by, with the successful applicant given their own personal camera for the game.

Hanging up the kit isn’t the only task in this role! There’s plenty of responsibilities for this role, with one lucky applicant getting an exclusive experience inside the KCOM Stadium, able to look after all of the team’s equipment, including balls and water, and print some of the playing jerseys. The kit man will also run the kicking tee onto the pitch! As a souvenir for their role, the kit man will be able to keep a match worn shirt from the player of their choice!

Take in the behind-the-scenes experience at the KCOM Stadium from a different perspective and join the referees for the coin toss, team sheet handover and walk on the match ball as the teams make their way onto the pitch.

Think you’ve got what it takes to be the next voice of rugby league? Take your position on the gantry with our commentary team as they describe the match action to listeners around the world on Hull FC Live. Meet the BBC Radio Humberside team up in the press box and get some advice before going live on air! After the match, the commentator will interview the Man of the Match in the glass-fronted Circle Restaurant. 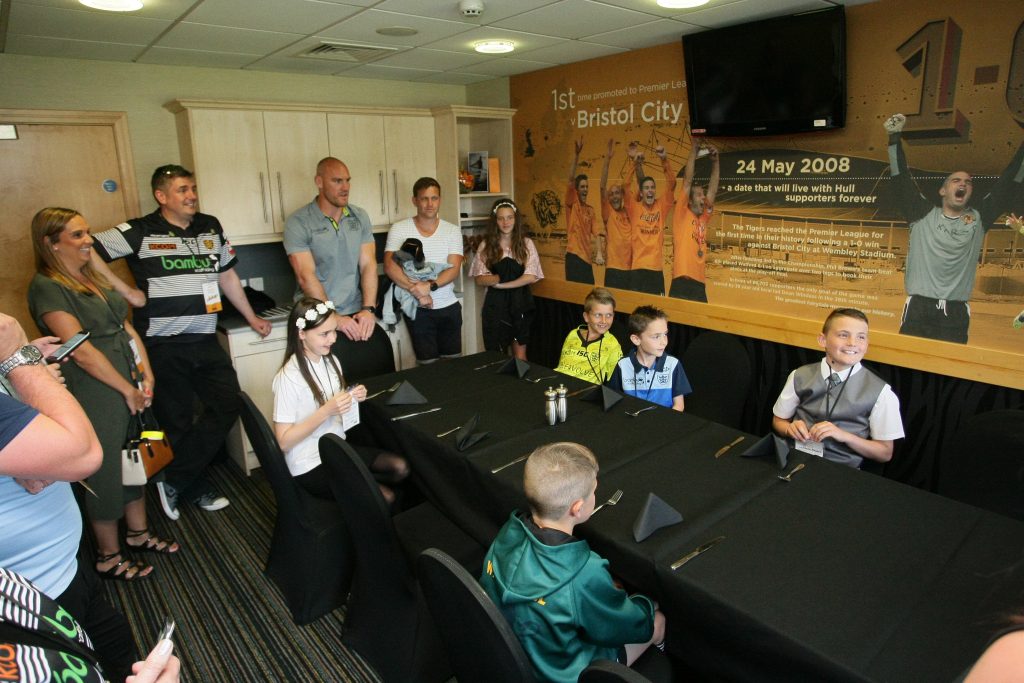