You are here: Home / Our Goole chats to local man who appeared on ITV’s The Chase

Have you ever wondered what it would be like to be a contestant on The Chase? Well Our Goole caught up with Aaron, a speech therapist from Goole who with his team managed to win a whopping £75,000 against the ruthless Mark ‘The Beast’ Labbett. Fellow team member, Marge opted for the higher offer of £63,000 and won her ‘Cashbuilder’ with The Chaser, which meant along with Aaron’s £7,000 and Kelly’s £5,000, the pressure was certainly on. Unfortunately, other team member Richard didn’t make it through his ‘Cashbuilder’ round and was caught out by The Chaser.

At ‘The Final Chase’ the team managed to get 17 questions right, and with eight opportunities to push back and five executed, The Chaser was unable to catch them. This meant the team each took £25,000 each home.

So Aaron, how long have you wanted to be a The Chase contestant?
“Since the show first aired! I love quizzing and always found myself shouting at the television so it made sense to put my money where my mouth is.”

Did you want to play against Mark?
“To be honest, of all the Chasers Mark was the one I least wanted to play against. He always seems to be one of the more formidable chasers on TV!”

Did you know in advance what offer you’d take/ did it change on the day?
“I always thought that what I took would depend on what I achieved on the day in the cash builder. I didn’t have an amount in mind that would definitely make me go higher or lower.”

How did it feel standing at the desk?
“I was surprised by how relaxed I felt! I think at that point winning was so far from my mind that I just wanted to enjoy the experience. It only happens once after all!”

Did you ever dare to imagine you’d be in the final Chase?
“Not for one second! I still can’t quite believe it now!”

What was it like taking part in the final Chase?
“Nerve wracking to begin with, but I felt more relaxed when the team started to get into a rhythm. Even then, the 2 minutes goes by a lot quicker than you think it will!”

Did you think you had a chance of winning?
“As we entered the studio I definitely didn’t think I’d have a chance of winning and even less so when I saw Mark walk out. There was a point in the final chase when I thought to myself ‘Oh wow, we could actually do this!’.”

What did it feel like to hear Bradley say you’d beaten the chaser?
“I was in such shock that I barely remember. It took some time to sink in and process, It didn’t feel real until months later!”

Do you think Mark was surprised your team won?
“I think he acknowledged that both sets of questions were quite tough on the day and it was anyone’s game.”

The Chase is on weekdays at 5pm on ITV. 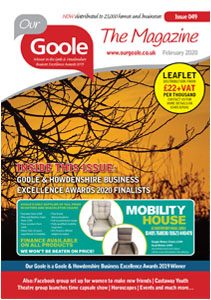 Beal says ‘hello Goole’ with launch of The Greenways

Not your ordinary cattle trailer!